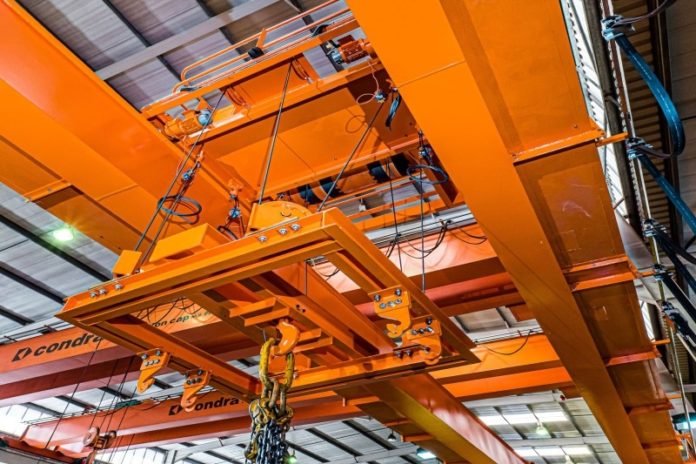 Leading crane manufactures, Condra Cranes have elevated in status the humble hook-block to become the key component of an electric overhead crane completed by the company for a metal refinery.

This particular machine was shipped in the third week of September.

The company says it is their engineering expertise, the flexibility offered by their in-house design facilities and a wide range of standard products that have placed them among the world’s leading crane manufacturers

According to Condra, its hoists are manufactured in several standard models suited to most mining, industrial and general applications of varying tons. The Hook-Block is designed to specification to meet the requirements of three different applications.

“(Hook-block) is custom designed to specification, the block comprised an electrically insulated square steel frame suspended horizontally from four rope pulleys at its corners, and fitted with five hooks to meet the requirements of three different applications,” reads the press statement.

The statement further states that after installation and commissioning of the crane, four of the five hooks will carry out the primary function of removing racks of cathodic plates from acid baths used in the refining process.

These identical hooks are bolted two to each side of the steel frame to steady the racks while the crane carries them to stacking areas ready for despatch. Steadying of the racks will allow faster crane movement and increased productivity.

The fifth hook, of conventional swivel design, is mounted centrally in the block to execute the crane’s secondary function of loading the plates onto trucks.

Routine plant maintenance, the third of the crane’s functions, will also be carried out by this fifth hook.

The rubber matting which can be seen at the pulley mounting points between the four pulleys and the square steel frame (photograph C) provides electrical insulation for the crane to protect its motors from the charge applied to the acid baths.

The company was founded in 1966, in Johannesburg, South Africa.  Initially structured as a consultancy and drawing office with general engineering capabilities, later research into the market for hoists and overhead cranes revealed an opportunity which Condra’s management believed the company could fill that of local manufacture in place of the local assembly of imported products.

The research indicated that there existed substantial demand for a range of robust cranes and hoists if these could be competitively priced.

Manufacture of overhead cranes began in 1971. Four years later Condra moved to a custom-built factory where design and manufacture of the first hoists began.

THIESS WINS $1.7B CONTRACT IN BOTSWANA