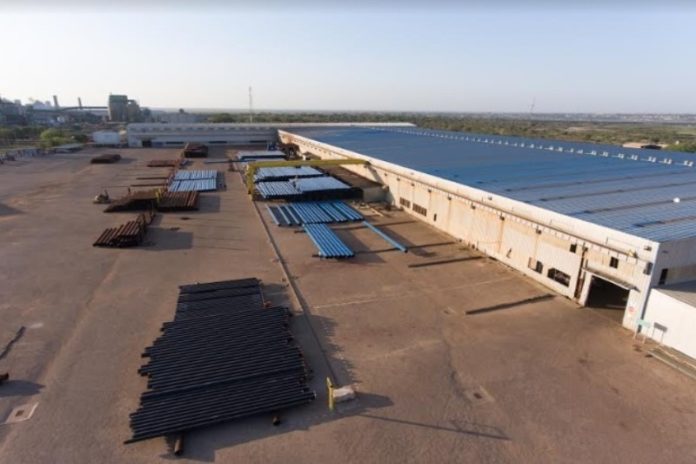 A US$12 million investment at Capital Star Steel in Beluluane Industrial Park will see the construction of the biggest industrial Hot Dip Galvanising Plant of its kind in Mozambique. This installation will enable the production of specialised coatings for steel products that meet the international standards and requirements for gas pipelines, LNG process plants and general infrastructure. Consequently, local engineering contractors will be able to bid for the increasing demand for galvanised steelwork required by the Mozambique LNG and Rovuma LNG projects.

Commenting on the importance of this investment and the Mozambican Government’s drive for Local Content, Capital Star Steel CEO David Scheepers said: “We are proud to be part of the development of the economic structure and industrial manufacturing base of Mozambique. With an initial investment of over US$100 million in 2007, Capital Star Steel has been one of the largest investments in the Mozambican engineering sector. The galvanising plant is another investment that will enable our sector to develop international capacity and provide services that will benefit our economy in the long run.”

Historically, the investment of galvanising capacity in emerging markets have a resounding effect on the stimulation and growth of those economies. Scheepers said that Mozambique should be no different. As a country with a coastline of over 2 470 kilometres, and with the bulk of industrialisation taking place along the coast, the use of galvanising coating is recognised as the main solution to protect steel structures used in building bridges, transmission lines and towers, highways, airports, factories and plants such as Mozambique LNG and Rovuma LNG.

“Preliminary estimates for galvanised steel structures of Phase 1 of Total’s LNG project will provide Mozambican companies access to more 60 000 tons of steelwork opportunities, generating over 1200 direct jobs valued an estimate of US$160 million,” Scheepers said. “Including ExxonMobil’s Rovuma LNG and the recent announcement by Total of a possible further 2 trains, the opportunity for Mozambican fabricators could exceed 200 000 tons, a growth prospect generating significant employment opportunities and foreign investment into this sector.”

Beluluane Industrial Park Managing Director, Adrian Frey also commented: “This is excellent news for all local companies that are positioning themselves as suppliers to the LNG projects and other industries. It is an important step for local content development in Mozambique.”

Since 2009, Capital Star Steel has produced over 225,780 producing pipes totalling over 2,700 kilometres with exports to the USA, South Africa, Botswana, Swaziland, Kenya, Zambia, Nigeria and Eritrea. It is the largest steel pipe manufacturing plant on the African continent. Operating from the Beluluane Industrial Park and Free-trade Zone, the 108,760m2 facility comprises of a 34,780m2 undercover factory and has a production capacity of 200,000 tons.

Beluluane Industrial Park and Free-Trade Zone is a Public-Private-Partnership between the Mozambican Government Agency for Investment & Export Promotion (APIEX) and Swiss-Mozambican investors. It is situated in Boane, Maputo Province and is home to 40 companies from 15 different countries. The park is home to Mozal, the second largest Aluminium smelter in Africa, and employs a total workforce of 5000. Companies operating within the free-trade zone may qualify for attractive exemptions on customs duties and tax offered by the Mozambican Government.