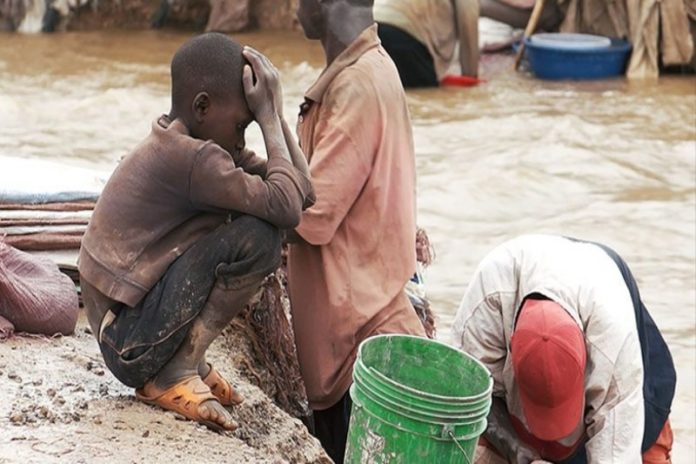 In the Chimoia province of Manica in Mozambique, illicit mineral resource extraction is one of the key sources of subsistence.

Children are initiated at Garimpo by family members at a young age, and many of them forego any chance of attending school early.

Nelito was already accompanying his uncle when he was six years old, and he saw family and friends perish here.

”There are a lot of people, that I usually see down there, and then asking for help. One of my uncles has died three days ago. I can’t breathe in there, I need a plastic bag and start blowing to be able to breathe”, the 6-year old said.

The search for precious and semi-precious stones often happens 80 meters below the ground without any security.

Even though the Ministry of Mineral Resources has banned exploration in this region, the illegal mining continues, they say that without it, they do not eat. Semi-precious stones are sold at bargain prices in this market or exchanged for essential goods.

Noé Bernardo is Secretary of the Munhena miners’ association.

”As we are now working in a group of ten people, the ten people a week are doing 20 to 25 grams for now. When we were well organized a week, we were out with 800 grams’’, Bernardo said.

Official data show that the illegal trade in precious stones is led by foreigners, with emphasis on Tanzanians and Thais.

“We found foreigners who come from very far away. There are situations where they are not in de facto mining, they are in the trafficking circuit, in the illegal trading, buying, selling and exporting circuit. The truth is that financiers have a lot of money circulating, and I know that there are lawsuits going on at the prosecutor’s office in Cabo Delgado and at various other sites against these foreigners”, said Obete Matine, Chief Inspector at the Ministry of Mineral Resources of Mozambique.

In 2019, the commander-general of the Police of the Republic of Mozambique said that the armed attacks in the north of the country are being financed by illegal gold miners, in response to the authorities’ inspection and repression operations.